So Delta’s blog is one of the oldest OSR ones, specifically focusing on OD&D that you can still find.  Started in 2007 and is still going today.

I looked back on the posts from 2007, and most of it is talking about OD&D as a viable game and comparing it to then contemporary 3.5 edition.  The tail end of 2007 has him talking about the announced 4th edition.

We all know how that went.  Maybe it’s a good game in and of itself, but it’s not D&D.

I digress.  There are a bunch of posts looking at various aspects of OD&D and Delta modifies and house rules them to make them even simpler, borrowing an idea here and there from modern gaming.

There is no specific post that I would consider “old gold” but he has since compiled all his house rules onto a single page on his blog.  If you’re wanting to try OD&D give them a look.

The stuff for encumbrance and combat are good mods, but I’m not looking to go back in time for my ruleset, and while his rules are better than the originals in play, they’re still more granular than I like.

If you want to see what the earliest days of “OSR” blogging was like, and see some intelligent looks at old rules and improvements to them, check it out.  Delta is a good writer and good at rules analysis.  Probably comes from being a teacher and stuff.

Here is the main link to the blog: http://deltasdnd.blogspot.com/

Here’s a link to his house rules all collected in one place (mostly what he blogged about in 2007): http://deltasdnd.blogspot.com/p/primary-house-rules.html

If you prefer, he’s also got a link to his games company page where you can get his house rules combined with the full rules of the OD&D-based game.  He’s got free rules for players and judges, and some other stuff on Lulu that you can buy.  http://www.oedgames.com/

Currently, in addition to still blogging, he appears pretty active on his YouTube channel called Wandering DMs.  I might check that out but currently, I’m more in reading mode than watching.  Catch this here: http://www.oedgames.com/

I’m going to continue reading into 2008 and beyond at some point, but for now I am going to dig around for some more stuff circa 2007.

Oh, and sidebar, the comments on Delta’s blog are funny, because he will have comments from a decade later, which he still answers.  Kind of shows that the content is evergreen, and people still find their way to the content.  Those blog comments have also been a good way to get plugged into more “lost” OSR content from back in the day, looking at blogs by his readers and blogs that his readers follow.

You’ll hopefully see me posting more about those at some point, too.

One last post from this blog before I move on.  “Sean” didn’t post a whole lot, but the maps he shared (sampled and linked to in my last post) were all amazing.

His final post before going dark in 2018 was to drop some cool weird B/X monsters on us.  This was his first post after almost 2 years silent.  He notes that it was some content he had posted to Google+ and wanted to save it from oblivion when that shut down.

You can grab those here: http://thestonegiantscave.blogspot.com/2018/11/well-its-been-long-time-since-i-posted.html

Oddly enough, though he is/was a talented artist, he declined to illustrate these.

I liked them a lot, and I found it well worth copying the URL to printfriendly.com to make a PDF for myself to add to my monster folder. 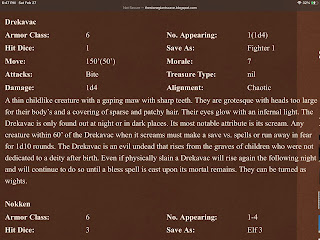 Note: some of these appear to be adapted from similar creatures in video games, but I don’t know if they all are or just some.  Regardless, loved the true DIY OSR spirit.

Sean, hope you are well and still enjoying drawing maps.

I think I am going to label posts like this with old game-able content to swipe for your own game as “old gold” just so I have a label to link them together.

Been checking out this blog today: http://thestonegiantscave.blogspot.com

Of interest, so far: A few custom classes.  Most are some D&D based space opera classes.  Spaceman, explorer, scientist, robot.  Kind of cool, but nothing special.  Probably have seen this kind of thing a ton of times by tons of folks.

What really did stand out to me - in 2013, one of the more prolific posting years - was a ton of scanned, hand-drawn map artwork.  It’s exceptional, hitting that perfect sweet spot of better than I can do, but looking like it’s old and hobbyist level.  Not all polished and digital and slick.

Here is a page with a few overland maps in black and white: http://thestonegiantscave.blogspot.com/2013/01/pulp-fantasy-sword-and-sorcerey.html 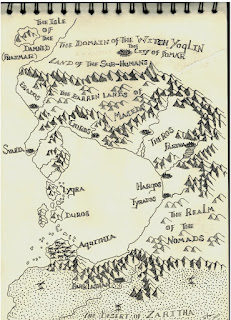 In a later post, he shows the city map here when it’s completed.

In this one he shows some colored maps that he did years earlier: http://thestonegiantscave.blogspot.com/2013/01/a-walk-down-memory-lane.html 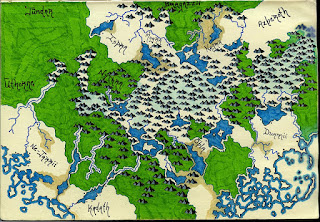 Again, love the style in these.  Aspirational, if I ever find myself wanting to draw maps. 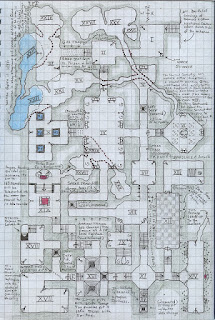 Showing off a wide variety of types and styles of design and rendering.

Based on other stuff this blogger posted about, I hope he was eventually able to go fishing some more.  Kudos, sir.  Hope you are well if you ever see this review.

Anyone else reading this who likes old style hand drawn maps, check these out.  Dig around as he had quite a bit more than I posted.

A resurrection or a rebirth or maybe even a beginning, finally

I don’t know if this will go anywhere.  But as of COVID, and March 2020, I started running D&D style games over GoToMeeting.  I run 3 games a week, 3 different campaigns, all different players.  Most of the stuff I run is gleaned from the OSR community.

This blog was created back when that was kind of sort of new.

Ten years old, at least.  A lot of blogs have come and gone.  A lot of cool stuff was jammed into Google+ and then vaporized.

I’m not ready yet to be creating original content.  But I think I will start posting here about “game-able content” that I extract from comics, shows, movies, books that I consume.

And then also do a revisit to any old OSR blogs I find that maybe don’t post anymore - maybe from those that still do - but look at their old content.

What is game-able and usable today?  A lot probably.

This is a very self-indulgent and non-content post.  But it’s like an anchor in time.  A declaration of intent.

We will see what happens tomorrow...