Old Gold - Simple Chase Minigame, Adaptable to Other Stuff, Too

Was looking for a mini-game or way to compress down some rules because a player in Tuesday’s game found a sentient intelligent but CHAOTIC sword.  He needed have a battle of wills with it in order to prove to it that he is boss.

Anyway, while digging for stuff to use in that, I found this.  It’s meant to simulate chases in D&D-like games, whether in a dungeon or city or wilderness or whatever.  It can handle multiple groups of pursued and pursuers, has a lot of hectic action, and resolves with a playable outcome. 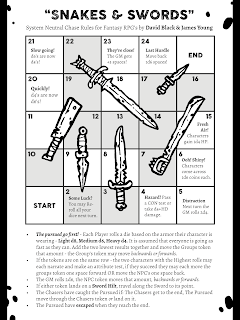 Hope this adds to your own game toolkit.  🙂

Link to source with 2 complete sets of rules on how to use it: http://tenfootpolemic.blogspot.com/2017/05/flee-snakes-ladders-chase-mechanics.html

FWIW, “Polemic” rules variation seems like it would work best when you have two or more groups involved in a chase.  David Black’s rules worked better as an adaptation for a one-on-one contest of wills.

Either way, worked great for this and will definitely use it again for its intended purpose as well as future adaptations.  This blog is also on my massive list for mining more material.

P.S. it worked awesome for the sword’s psychic struggle with its new owner.  Lots of drama and back and forth before a winner was resolved.  I used the Black rules version, with speed being a substitute for willpower.

I treated it like a black hack style usage die, where each roll of a 1 would drop you one die size to a minimum of d4.  Spots on the board that gave you a negative would also drop the die, positive ones would bump it up to a max of d8.

I gave the player 12 rounds to win or else would lose.  He had the option to “rest” in between rounds and both he and the opponent would bump up a die size, but lose two turns.