This blog stopped updating in 2015, but I’ve only read it thru 2010 so far.  Mostly about wargaming and minis, which I’m not that much into. 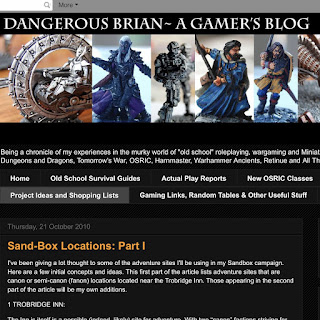 Finally got to some “old gold” - shit I can swipe - when he was laying out some stuff he was converting from Harn for use with OSRIC for a game he was running.

Two posts in a row of cool, short write ups of hex-crawl sites.  Two of my 3 weekly games are doing hex crawls and I feel like these descriptions would get players wanting to check these spots out.

15: THE GHOST TOWER OF ELKALL-ANUZ The Ghost Tower of Ekall-Anuz is said to move regularly from one world to the next. Certainly, it often stands in the ruined city of the same name, but travellers insist that on other visits, sometimes as little as a week later, the Tower has vanished from the ruins, only to appear again at some later date. Seemingly without pattern.

Good, right?  So I went to printfriendly and pdf’d them, then combined them in GoodReader because that’s how I wanted them, lol.

And as a little bonus, he’s got a page on the site with a bunch of cool random tables I will check out more before I’m done with this blog.

Cheers to you, Brian.  Hope you are well and still dangerous.